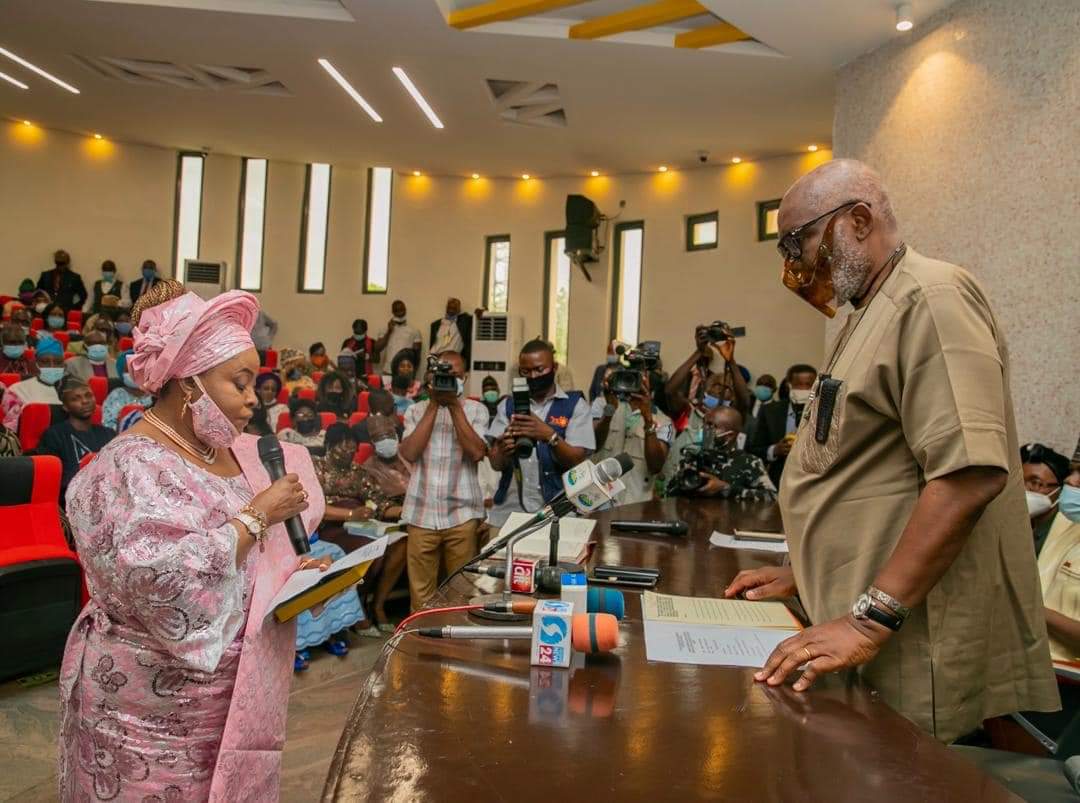 Odu is the first female SSG since the creation of the Sunshine State in 1976.

The wife of the Governor, Arabinrin Betty Anyanwu Akeredolu, attended the event held at the Cocoa Conference Hall of the Governor’s Office, Alagbaka Akure.

The Governor said the people of the state expect more services at the optimal level, adding that all appointments shall be marked as templates for impactful governance.

He described Ondo state as an inspiration to other states for the unrelenting investment in human resource.

While speaking on the choice of Princess Odu as the SSG, Governor Akeredolu described her as a symbol of limitless possibilities of attainment for a well-trained female child.

The Governor said Odu represents the erstwhile suppressed voices on account of gender, adding that she has been around for quite some time and seen it all.

“This is a new experience. She is expected to bring to bear her wealth of experience as a seasoned administrator, lawyer and, I dare say, an academic. This State is proud of her investment in her and other female children making us proud,” he said.

Governor Akeredolu, who described Mr. Aragbaiye as a decent man, noted that it is a honour to have him on board of the ship of his administration as Special Adviser.

“The immediate past Head of Service, Mr. Dare Aragbaiye. It is a great privilege knowing and working with this decent man. He will make any shortlist designed for altruistic service anywhere. I am happy to have him back so soon after his disengagement from public service as a career civil servant. I am sure many civil servants, especially members of the workers’ unions, are happy to have him back.

“The other appointees are returning to continue to offer their services to the State in almost the same or contiguous turfs. The importance of their offices, as well as their performances during the first term made their return compelling. We shall be exacting more positive results based on their work plans,” Governor Akeredolu said.

The event was attended by the Deputy Governor, Hon. Lucky Aiyedatiwa; members of the State House of Assembly led by the Speaker, Rt. Hon. Bamidele Oleyelogun; Chief Judge of the State, Hon. Justice Olarenwaju Akeredolu; President of the Customary Court of Appeal, Hon. Justice Eunice Alade; Royal Fathers, Religion leaders and other dignitaries.