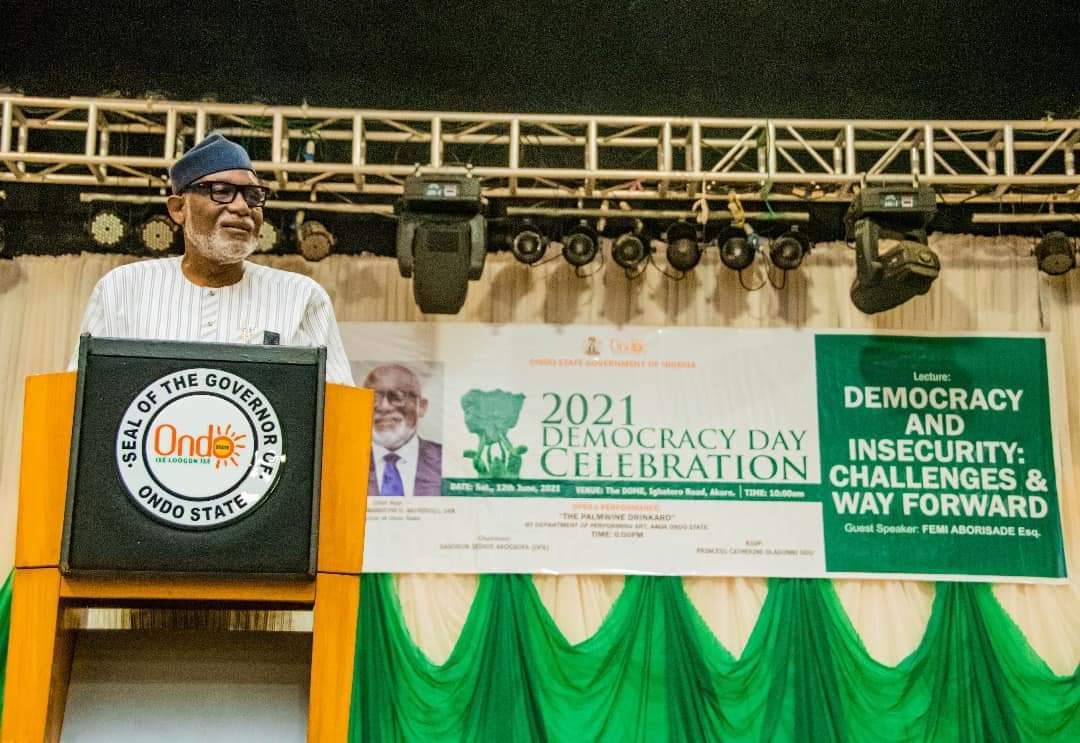 Ondo State Governor, Arakunrin Oluwarotimi Akeredolu, SAN, has called for an urgent paradigm shift in the country, saying the lessons of June 12 must be imbibed.

Governor Akeredolu said the current happenings in the nation suggest that the lessons derivable from the June 12 experience have been cast aside.

He lamented that the level of poverty in the country is disturbing, saying it amounts to a hope deferred.

Governor Akeredolu spoke on Saturday at the 2021 Democracy Day celebration with the theme “Democracy and Insecurity: Challenges and Way Forward”.

The Governor explained that it is very important to improve the living condition of the people, adding that unemployment has been a major problem in the country.

“There is the urgent need for a paradigm shift. The army of young but unemployed Nigerians keeps growing.

“Lack of basic skills required to address existential issues in an underdeveloped society among majority of them should be a cause of serious concern to us all.

“It is the reason for the ease with which unscrupulous elements recruit young people for criminal activities,” he said.

He also canvassed for a viable opposition which he said was Important as part of the key features of democracy.

Earlier, the Chairman of the occasion, Basorun Seinde Arogbofa, commended Governor Akeredolu for his bravery and boldness, while urging other state Governors to emulates him.

“Akeredolu deserves to be encouraged and we have to encourage him so that he can do better while we continue with our struggle to restructure the country to avoid a break-up,” he said.

In his lecture, Femi Aborisade Esq, argued that neither secession nor restructuring alone was the ultimate solution to the problems of poverty and physical insecurity in the country.

He submitted that the fundamental solution to the problem of poverty and physical insecurity was a paradigm shift in the philosophy of governance.

Aborisade explained that unless there was a paradigm shift, poverty and physical insecurity would merely be replicated in the emerging republics or in the restructured Nigeria.

The guest lecturer also said the shift lied in the implementation of chapter 2 of the 1999 constitution which guarantees socio-economic rights, free education, free healthcare, social housing and others.

According to him, this involves a shift of attention from the so-called “national development” to seeing development in terms of wellbeing of ordinary people, including observance of their fundamental rights.

Aborisade said: “Central to meeting the wellbeing of ordinary people is adoption of radical measures to reduce inequality. Thus, along the suggested paradigm shift, we need to promote the following.

“The State to bear primary responsibility for public good, establish, own and control public enterprises to employ the army of unemployed.”