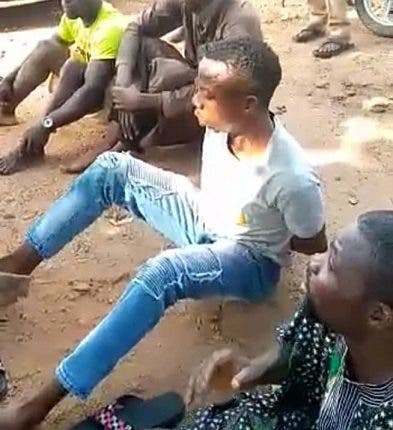 The police in Ondo state have arrested five men who belong to a syndicate who specialises in exhuming corpses from a cemetery.

The cementry where they operated  belong to a Church in Ondo town in Ondo West Local Government Area.

The five men were alleged to be involved in exhuming corpses and selling the severed human bodies to herbalists.

One of the suspects, Opeyemi Odetola, was arrested by the Police patrol team with a sack containing human parts, while travelling to Ifetedo from Ondo town.

Others were arrested after an investigation by the policemen at Funbi Fagun Division, Ondo.

Confessing to the crime, Odetola said he came from Ifetedo to collect the parcel on behalf of his brother, Lanre Akintola, only to be arrested when the police saw that the sack contained human parts which include male chest and various other parts.

He said: “My brother sent me to Lanre to collect the parts from him “eran oniyo,” which means human parts. So, I collected the package from Lanre at Ife Garage, and immediately took a bike going to lfetedo only to be caught by the police at the checkpoint.”

Akintola while speaking said “one Clement Adesanoye, who works as an attendant at Okuudu cemetery gave me fresh male parts to deliver to a herbalist at lfetedo along Pele area.

“But I later received a call from Opeyemi that his brother said he should collect the parts from me, which I delivered to him and received five thousand naira for the goods.

Another suspect, Clement said the parts were to be delivered to Alowonle Kehinde and Jubril Jimoh who are herbalists, saying they planned to use the human chest for a ‘Yahoo boy’ in Ifetedo.

“Two of them are herbalists, I only supply different human parts to them and I knew Alowonle through Jubril because he is a regular customer. I have known him for long,” he added.

However, the five suspects had been transferred from Ondo town to the State Criminal Investigation Department (SCID) for further investigation.