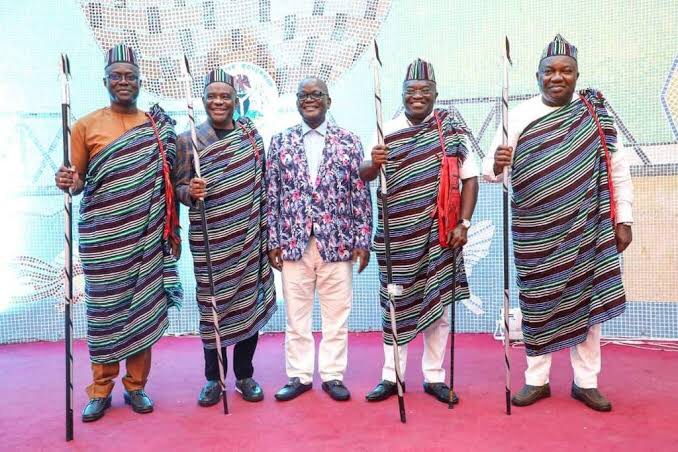 Five Governors of the Peoples Democratic Party, who have described themselves as the G5, on Saturday met in Lagos as the division within the PDP lingers ahead of the 2023 elections.

They met in Lagos at the residence of the party’s former Deputy National Chairman, Bode George and announced the formation of the Integrity Group.

At the end of the meeting, ex-governor Jang briefed journalists. He said the group is still open to consultations in resolving the crisis rocking the main opposition party.

“We at this meeting have decided to stand on the decisions we took at our last Port Harcourt meeting. We hereby again reiterate that the window for reconciliation in our great party, the PDP remains open,” Jang said.

Also speaking, Governor Makinde said that the G5 governors were the face of their struggle and were being backed by the leaders and elders of the party present at the meeting.

“The G5 is all about the Integrity Group. You can see us, five serving governors, as the face of this struggle but the leaders and elders of the party that you see here are the people behind those faces,” Makinde said.

“We are this morning in the South West to review the situation within our party, to review where we are and to also look at what is going to happen in the coming elections.”

The Oyo governor also pledged to briefing Nigerians on the update at the end of their deliberations.

This is coming two months after the group met n Port Harcourt where it vowed not be part of the presidential campaign of the party’s flagbearer in the 2023 election, Atiku Abubakar.

The G5 have called for the removal of the party’s National Chairman, Iyorchia Ayu, citing regional balance in the party’s structure.

However, Ayu has insisted that he won’t step down till the end of his four-year tenure, even as the G5 made his resignation a precondition to support Atiku’s 2023 presidential ambition.

While Wike and his allies have not been seen to campaign for Atiku, it is not clear whether they will support Tinubu or Labour Party’s presidential candidate, Peter Obi, in the contest for Aso Rock’s top job.