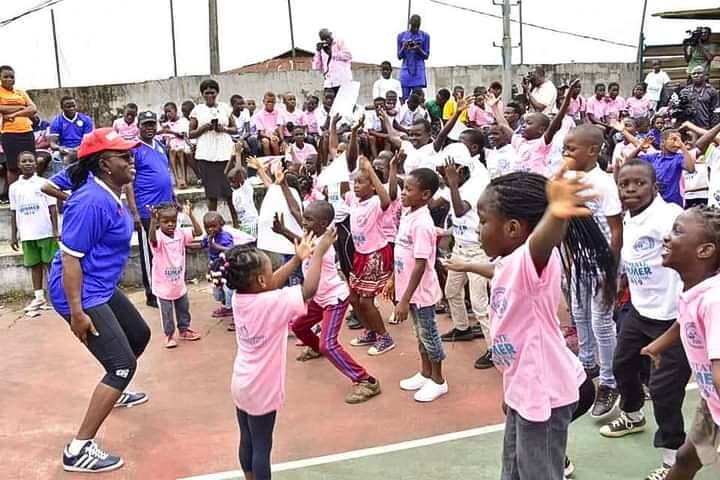 The tennis association disclosed this, Friday, in a letter of nomination presented to the governor’s wife at the BRECAN Centre, Akinyemi Way, Off Ring Road, Ibadan, Oyo State Capital.

Speaking on behalf of the association, the Chairman, Akin Orebiyi, said the tennis association nominated Mrs Betty Anyanwu-Akeredolu because of her love and contributions to the development of Tennis.

According to Orebiyi: “We chose Mrs Betty Anyanwu-Akeredolu because of her love and contributions to the development of Tennis. Having listened to her remarks, I realised that we have made the right choice in Oyo State.

“I believe that our coming together will accelerate Tennis development in Oyo State, especially among our young ones, because our focus is to catch them young.”

While reacting to the nomination, the First Lady thanked the tennis association for considering her worthy as matron while noting that Tennis is a game she really loves.

She said: “Tennis is a family sport for us. My husband and I play Tennis, our children also play. I used to tell the story of how I took interest in Tennis as a youth corper. My husband did not have enough money to take me out as a corper, so our outing was usually Tennis and that was okay for me. I used to go to the Tennis Club with him and that was the beginning of my interest in Tennis.”

The governor’s wife, who also explained why she founded Ondo State Summer Tennis Club, said the talents discovered through this effort have now started to go for tournaments.

She continued: “At the Ibadan Recreation Club, there were some members that promoted the tennis game. Our children had the opportunity to play at the club, and even kids from outside came. One Mr Okoro, now late, was particularly helpful with the summer tennis. For the first time, I saw in him a Nigerian who was accountable and transparent with public fund. So, as First Lady, I decided to replicate it; we now have Ondo State Summer tennis Club. From the first edition in 2017, I observed that people showed interest because they have never had that experience before then.

“The parents saw where to dump their children during the summer and the children had so much fun. Later I decided that it should not just be about the Summer Tennis that would come and go; that we should identify the budding talents . Then I formed my own Arabinrin Junior Tennis Club and started to invest in them. They now invite us for tournaments, and that is where we are now. Tennis is a game that I really love, so I didn’t think twice before accepting your nomination as Patron.”

Other members of the tennis association at the meeting include Alhaja Romoke Ayinde and Coach Peju Faboyinde.