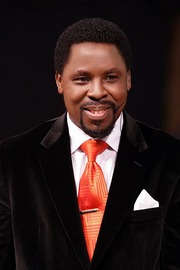 He died at the age of 57 in Lagos on Saturday evening shortly after concluding a programme at his church.

TB Joshua was the leader and founder of The Synagogue, Church of All Nations (SCOAN), a Christian megachurch that runs the Emmanuel TV television station from Lagos.

According to Wikipedia, Joshua was known for his popularity across Africa and Latin America and his social media presence with 3,500,000 fans on Facebook.

His demise was confirmed by the accountant of the church, Tunde Olanipekun.

He said his corpse has been deposited at the mortuary.

He added that the church will come up with an official statement.