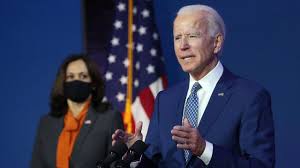 US President-elect Joe Biden on Friday introduced the final members of his “worker power” economic team and pledged to provide more help for struggling families and small businesses.

Speaking just one day after lawmakers finally certified his election victory following the invasion of the US Capitol by supporters of outgoing president Donald Trump, Biden announced he would next week unveil a relief program for the pandemic-ravaged economy.

The far-reaching package including stimulus checks to taxpayers and an increase in the minimum wage will be a top priority for Biden, along with accelerating the Covid-19 vaccine rollout that he called “a travesty.”

“We need more direct relief flowing to families, small businesses, including finishing the job of getting people the $2,000 in relief direct payment,” he said.

The $600 stimulus checks included in an aid package Congress approved in late December “is simply not enough,” Biden said at an event in Wilmington, Delaware.

The Senate blocked an effort to increase the second round of stimulus payments to $2,000, but Biden said families are having “to choose between paying rent, putting food on the table (and) keeping the lights on.”

His team also will give special attention to small businesses, especially those owned by minorities, and provide “support to help them get through the other side of this crisis”

He lamented that under the Trump administration “big, well-connected businesses jumped in front of the line” to get aid, and vowed to tighten controls to prevent fraud.

In an aid package passed in December, Congress approved $284 billion for a second round of loans to small businesses via the Paycheck Protection Program, which are due to roll out starting next week.

Biden said money is needed to reopen schools safely, and also for state and local governments to retain teachers, police officers and firefighters.

With Democrats poised to take control of both houses of Congress following victories in two Senate runoff races in Georgia, Biden said he hopes to win support for increasing the US minimum wage to $15 an hour.

“I’ve long said that we need to reward work, not just wealth, in this country. People in both parties recognize it’s time to raise the minimum wage,” he said.

If confirmed by the Senate, the nominees he introduced Friday will play key roles in implementing his economic programs.

Raimondo would be involved in negotiating the aftermath of trade wars instigated by Trump, as well as in the ongoing debate over how to regulate tech giants.