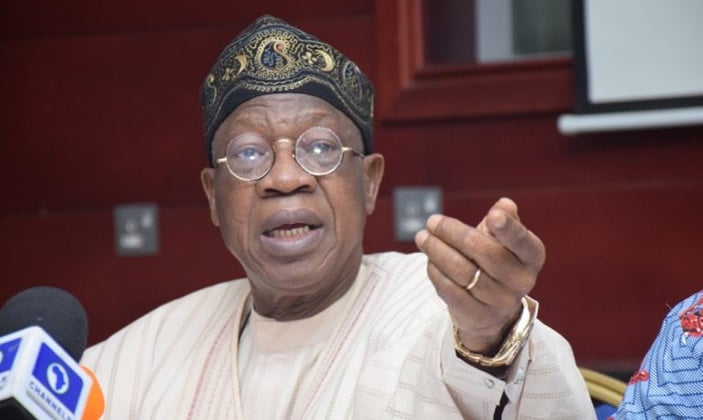 The federal Government says it has uncovered about 476 Online publication sites dedicated to daily churning out of fake news to fight the government.

The Minister of Information and Culture, Alhaji Lai Mohammed said the latest of the hatchet jobs by the traducers was the fake publication on President Muhammadu Buhari’s mental status.

“The latest which I found ridiculous is the one that said days ago, that they had information that when Mr President was in the UK the last time, he was advised to step down because he could not even recognise members of his immediate family.

“I begin to wonder how they can go this far, simply because they know that people are gullible and they will make the fake news to go viral,’’ he said.

Mohammed spoke in Abuja on Monday, when he received officials of the Nigerian Institute of Public Relations, NIPR, on a courtesy visit.

”Fake news is taking a new dimension and threatening the existence of the country…The debilitating effects of the menace is not only on the government but on every Nigerian.

”Many marriages had been wrecked as a result of fake news, particularly through the social media while people had lost their lives and many others committed suicide,” he stated.

To buttress his position, the Minister recalled a recent report where fake news almost led to killing of 600 applicants by scammers.

“A young man sent out letters to 600 people to enlist into Nigerian Army and collected N10,000 from each of them.

“He asked them to report at the Okitipupa Army Barracks in Ondo state on a particular day to collect their letters of appointment.

“At the same time, he alerted the Commandant of the Barrack that Boko Haram insurgents were coming to invade the barrack on the same day,’’ he said.

He said the Nigerian Institute of Public Relations, NIPR, had a critical role to play in ensuring the fight against fake news.

“This is where your body comes in because you have a powerful platform to ensure that the menace of fake news is confronted squarely.

“Regrettably, however, members of this institute have been found wanting, they have most times place pecuniary interest and motives above patriotism and nationalism

“You will recall the sad incidence of the P&ID saga.

“It was a member of this institute, a firm of PR consultants that was hired to give impression to the world that Nigeria entered into agreement with P&ID and renege and have to pay about nine billion dollars.

“It took the combine interventions of this ministry and the Office of the Attorney-General of the Federation to go to the UK to change the narrative to prove that the purported contract was a huge scam,’’ he said.

He also assured NIPR of the support of the ministry in its proposed plan to use its platform to engender stakeholders interaction and engagement on national security and cohesion.

The National President and Chairman, Governing Council of NIPR, Malam Mukhtar Sirajo, said they were willing to work with the Nigerian Government to engender peace and unity.

He also seized the opportunity to invite the Minister to the Annual General Meeting of the Institute holding in Bauchi in May.