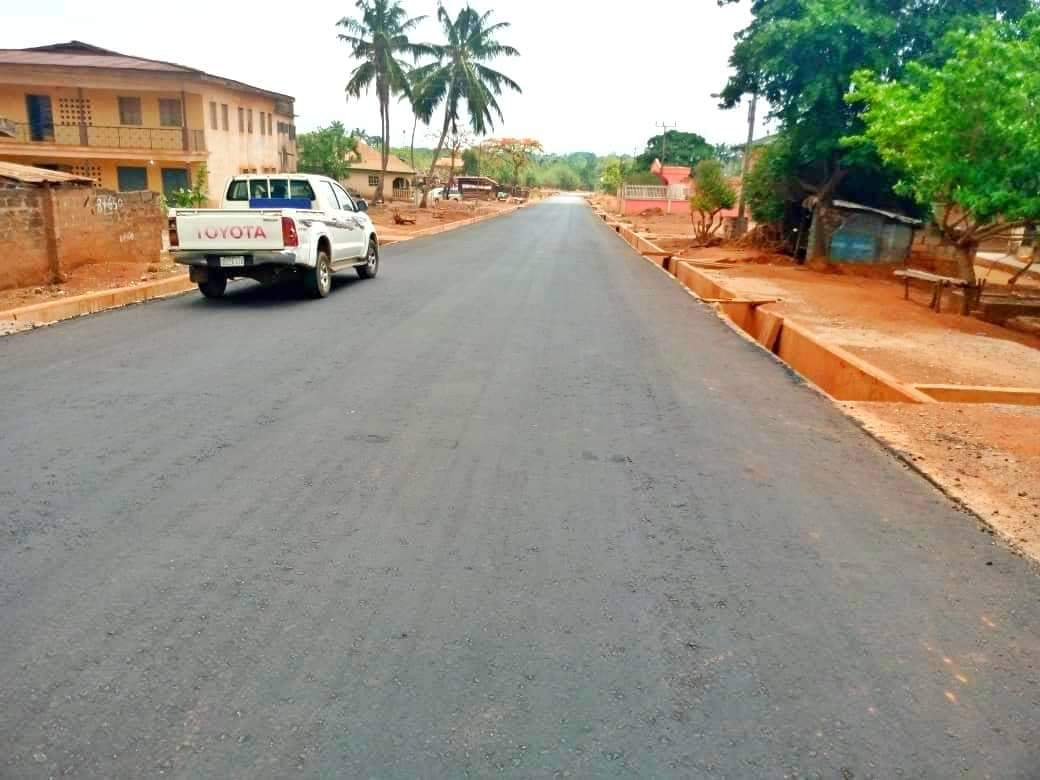 The construction of the 8.625km Ikaram-Akunu road in Akoko Northwest local government by the Governor Oluwarotimi Akeredolu administration has almost reached the completion stage.

Governor Akeredolu flagged off the construction of the road during his 3rd Anniversary in office in February 2020 after many years of neglect.

The road was last constructed 18 years ago during the administration of the late former Governor Adebayo Adefarati.

The Ikaram-Akunu road is the nerve that connects the North and the Southwest, as people coming from Lagos, Oyo, Ogun and Osun states and even Ondo State to Lokoja in Kogi state ply the road.

The Commissioner for Lands and Infrastructure, Engr. Raimi Olayiwola Aminu said the road is being constructed to specification to accommodate heavy-duty vehicles and for it to stand the test of time.

Speaking during an inspection of the project, Engr. Aminu expressed satisfaction with the level of work done, adding that the contractor is still working within the time frame given.

The Lands and Infrastructure Commissioner noted that the concrete work is almost completed, saying there are hydraulic structures of various sizes.

“The base course used is not laterite, it is a crushed stone base. We specifically designed that for this road because of the expected volume of traffic on the road after completion.

“If not the temporary blockage at Ikare axis, articulated vehicles like Dangote trucks and other of that nature would have been passing through the road. But we cannot stop them. That is why we prepared it in such a way it can accommodate such vehicles transversing the road.

“So, it is one of the best roads we can see in this area or the southwest. The road is in three segments. We have the Akunnu-Ikaram axis of about 8.625km. We Akunnu-Ikaram-Oke-Agbe axis which is 7km and we have some sections of the township roads which is 1km. The total kilometres of the project is 18.625km.

“From the explanation given by the contractor, he promised to deliver between one to two months. But we will prefer the two months because of the nature of the outstanding job. We have even rushed the contractor more than necessary. Secondly, we are approaching the rainy season which will slow them down a bit. So, all these factors ought to be put into consideration.

“The road is one of the major roads own by the government. It is the nerve connecting Ondo State and the Northern part of the country. Anybody going to Abuja, Kabba, Okene, Lokoja from any part of the South West, this is the road they always pass through.

“Also, there is a very thick population in this area which is in the northern senatorial district of the state. They deserve the road and that is why Governor Akeredolu gave it to them.“ Engr. Raimi said.

He recalled that when the road was flagged off, many people believed that it was an election gimmick, adding that despite the paucity of fund everywhere, Governor Akeredolu has decided to construct the road.

Earlier, the contractor Engineer, Engr. Edgard Barakat of the CARREGGIATA Nigeria Limited said the project will be delivered between one and two months.

“As regards the quality of the project, engineers from the Ministry of Lands and Infrastructure are always with us to monitor the asphalt laying. They are making sure that the temperature is correct. They are also monitoring the mixing at our quarry which is very close to the site here. We are working within our best to deliver between one or two months but I hope that we will deliver within one month.“ He said.

Similarly, the Project Consultant, Engr Kasali Adebayo Shittu explained that the contractor is currently working on the pavement, adding that the pavement consists of sub-base and stone-base.

He said the contractor is seriously working and has assured that the section of the project will be completed within a month or two.