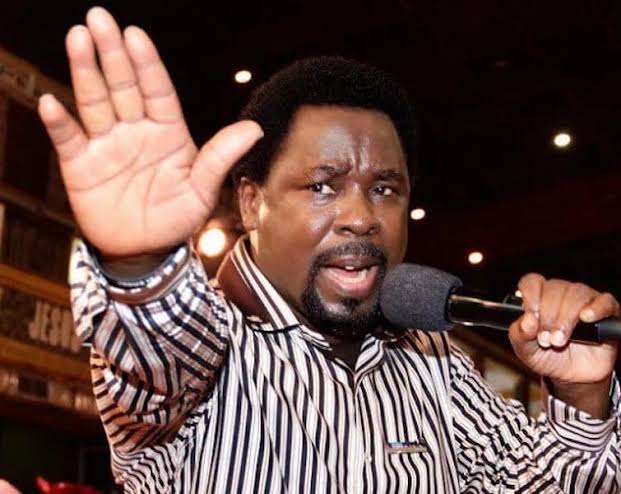 The Olubaka of Oka Akoko, Oba Adebori Adeleye has expressed shock over the demise of an illustrious son of Akokoland and Ondo state, Prophet Temitope Joshua, whose sudden death took place in the early hours of Sunday, 6th June 2021.

Oba Adeleye described the loss of the renowned Prophet as very painful and irreparable one to his immediate community of Arigidi, the entire people of Akoko, Ondo state and the nation at large.

He described Prophet Joshua as a man who had lived a fulfilled life as he impacted souls with his evangelism, benevolent act of giving and uplifting lives.

According to the royal father, T B Joshua as he was popularly called believed in making meaning in the lives of others so as to gain the blessings here on earth and the life after.

Oba Adeleye maintained that, as an astute and unrepentant giver, and a man who loved to give than to receive, Prophet Joshua gave his life for people and lived to transform lives of the people who came across him during his life time.

The foremost traditional ruler emphasised that, although Prophet Joshua lived in Lagos where his ministry is situated but he was a man who was constantly in touch with his root, as he continuously made his contributions to better the lives of the people of Akoko and by extension Ondo state at large.

According to the royal father, worthy of mention was the charitable and giant stride Prophet Joshua made to rescue the entire people of Akoko, comprising of four local governments from total blackout as a result of accumulated debt owed the Power Holding Company of Nigeria in the entire four council areas.

Olubaka explained that to the surprise of the royal fathers and entire people of Akokoland, Prophet Temitope Joshua came to the rescue of the various communities in Akokoland and paid off the bill without batting an eyelid.

He said, Prophet T. B. Joshua was a well-respected man, a humanitarian and philanthropist whose works speak volumes as the lives he had impacted will continue to resound his praises and show the proof of his impact.

Oba Adeleye further explained that it is on record that not only people of Akoko extract benefited from his large heart, but everyone from Ondo state, Nigeria and the global community got a share of his high spirited dedication to humanity.

He said, Prophet Joshua was an international giant, a religious voice in Nigeria whose humanitarian activities and efforts in Haiti, Philippines and several other countries around the World will continue to reverberate as reference points to generations yet unborn.

Olubaka added that the late founder of the Synagogue church of All Nations (SCOAN) was a man who dedicated his life to the best of humanity as testimonies abound to this effect on how he changed lives, lifted the downtrodden, demonstrated unprecedented care and passion for the defenceless and the weak.

The traditional ruler noted with great sense of loss that with the sudden demise of Prophet Temitope Joshua, an “Iroko” has fallen, a gold-hearted religious leader is gone, a pillar of support to many people is no more and one of the pride and giants of the Sunshine state and our great country has finally taken his bow.

Oba Adebori therefore prayed for the repose of the soul of Prophet Temitope Joshua and prayed that God will grant Ondo state, Nigeria as a whole and indeed his numerous followers across the globe the grace and fortitude to bear the painful loss.