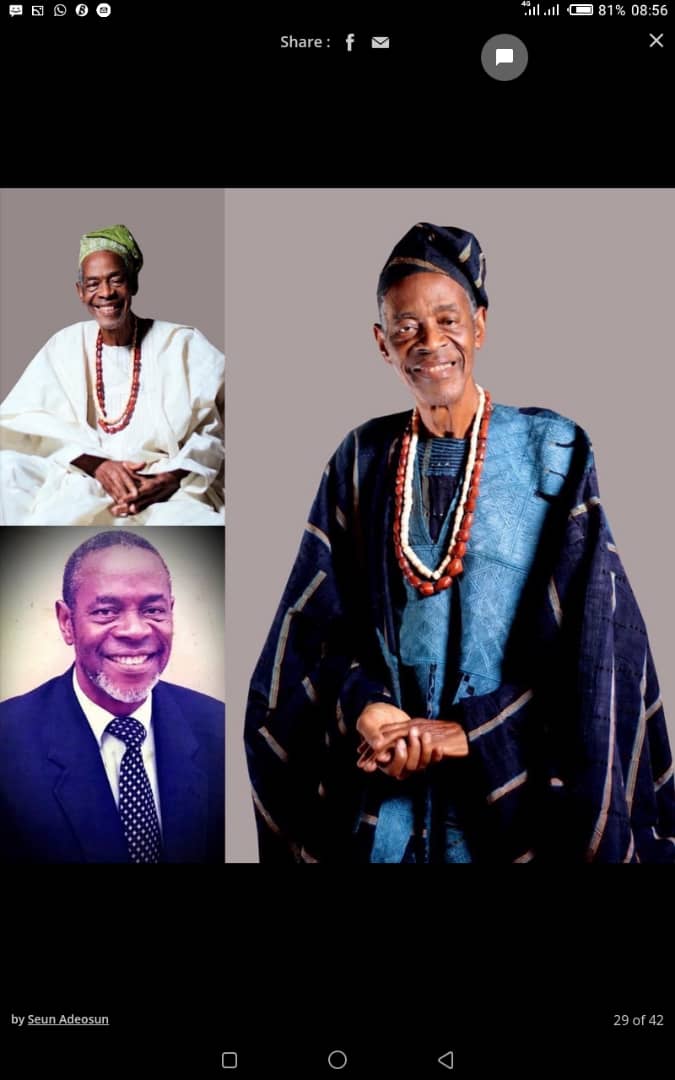 It’s about the reflections of input of an individual in the shaping of future of thousands of young boys who had been seen as future of the great nation called Nigeria.

Chief Olusola Bayode JP had worked in various schools as a teacher and eventually became the pioneer Principal of Aisegba Community High School, Aisegba-Ekiti where he laid a solid foundation for the school which was the pride of the agrarian community.

Busy with the task of developing the new school, Chief Bayode’s alma mater and famous Christ’s School, Ado-Ekiti was also in need of an ‘old boy’ that would take over from the outgoing Principal , Mr S. O. Agbebi who had reached retirement age.

And, based on standard that only old boys could be Principal of the School, the committee of concerned stakeholders did not waste time to arrive at the choice of Chief Olusola Bayode for one of the oldest schools in Nigeria. That was in 1984.

Full of determination as the new Principal of Christ’s School, Chief Bayode tailored his students towards societal expectations in the socio-economic and political sides of development from community to global level.

It was a period people entrusted their children to the school authority not minding the distance between climes.

The standard of education obtainable at Christ’s School attracted many to withdraw their children from Europe and America to study back home. Big thanks to Chief Bayode el tal for the enviable status.

There was that confidence , more so that Chief Bayode himself had also withdrawn his children from Federal Government School to the Agidimo Hills.
We had expatriates from different parts of the world playing significant roles in building a formidable and enviable academic structure under Chief Olusola Bayode.

They include Mr Subra who taught Physics, Mr Thiruchelvan who took Biology, Mr Koshi, Mr and Mrs Pole as well as Mrs Solomon who are all Indians.

We also had Mr Shohan and Mr Gopinat who came from Pakistan. There were also Ghanaians who include Mr Odoi, Mr Paul Morgeon, Mr Asamouah and Mr Kese of Kese bread fame.

There were many of them I couldn’t remember quickly.

They all worked with him to instill discipline and worked towards ensuring that Christ’s School was “not in name only” as well as achieving the target that everybody should be proud of us in “games, sports, knowledge and morality and for academic encouragement”.

Apart from academic-related strategies, Chief Bayode employed the use of parables, analogies and realities of the existence of human being to lecture us on why we must be involved in certain things and why we must also get involved in some components of human endeavours.

This simply refers to a person who wants to succeed without hard work. And this one, “Ijesha to j’isu loja, ara wa ko, Ijesha to kole alaja mefa, ara wa ni…” This also emphasizes the fact that success has many fathers while failure is an orphan.

He would dress in school uniform and track late comers to areas where they used to hide like school farm, amecho and the road leading to the Bishop’s residence.

Chief Bayode was a diligent and committed school administrator who also focused on infrastructural development. This writer could refer to the construction of the new Library housing the Hall of Fame, old SSS block, JSS block, new Lecture Theatre, etc. All were built by Chief Olusola Bayode administration.

And as he bade the world farewell at 82, his community, family members, associates, colleagues as well as the old students’ associations have put in place numerous befitting programmes for the home-going of the Ikere-Ekiti – born foremost educational administrator.

The burial programmes were billed to kick off with a commendation service at Aisegba Community High School, Aisegba-Ekiti where Chief Bayode served as the pioneer Principal while service of songs was also slated for his residence in Ado-Ekiti as a mark of giving honour to whom it is due by co-landlords and residents for his interest in societal and community development.

Being an ‘old boy’ of the famous Christ’s School, Ado-Ekiti and in recognition of being the agent of sustenance of the dreams of the foundling fathers of the school built on Agidimo Hills as well as one of the greatest influence in the process of improving on the academic excellence the school was noted for, the members of the Old students Association would converge on the school premises on Wednesday for service of songs as well as night of tributes in honour of the departed promoter and moulder of future leaders.

The following day would witness the past and present Principals of Christ’s School receive his body before a lying-in-state would be held at his Ado-Ekiti residence after which all would proceed to his home town, Ikere-Ekiti for another lying-in-state and Christian Wake.

The funeral service is billed for St. Luke’s Anglican Church in the town while his body would be interred at the church cemetery.

The burial programme is fast becoming a carnival as all the eleven sets that completed school certificate under Chief Bayode have picked different ‘aso ebi’ just as they have made provision for themselves and their guests.
Nine out of the eleven sets have also donated gifts which include cash, drinks and nine cows to support the family.

Information at my disposal shows that a large number of them have arrived Nigeria from various parts of the world to give their respected principal who they once dreaded last respect for shaping their lives and putting them on the right track in life.

As Chief Olusola Bayode JP P.E.N, the Preacher’s Son prepares for the journey to eternity, I join hundreds of thousands of his students, colleagues, friends, family members as well as distant admirers to wish the man we nicknamed “Oga this way” eternal rest and pray that God in his infinite mercy will protect everything he left behind.