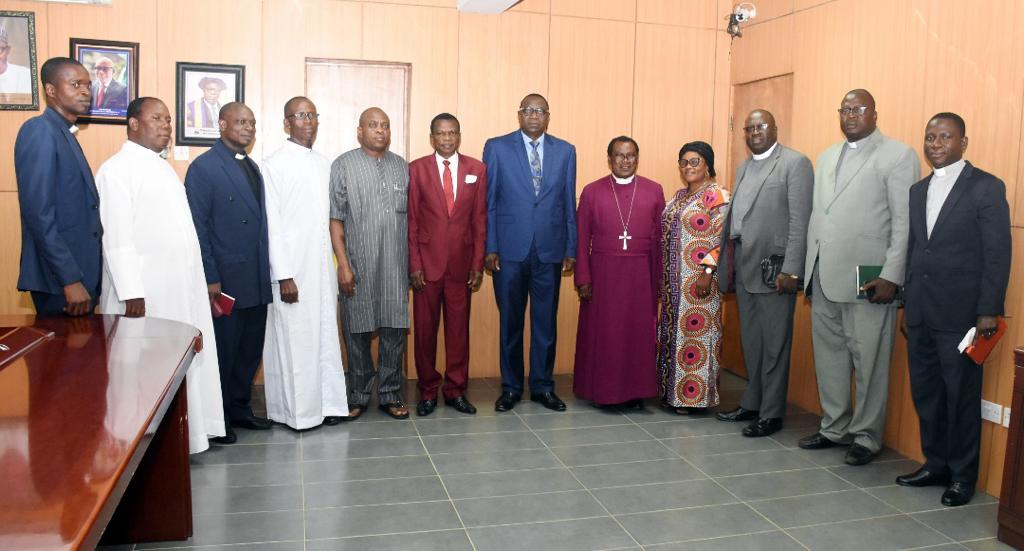 The Vice Chancellor of Adekunle Ajasin University, Akungba Akoko, Prof. Olugbenga Ige, has said that his focus was to build a better and greater Institution that would be nationally and globally relevant and recognized.

He stated this on Monday, July 12, 2021, while receiving the leadership of Akoko Diocese of the Anglican Communion led by the Bishop, Rt. Rev Jacob Olajide Bada, who came to congratulate him on his appointment as the 6th substantive Vice Chancellor of the Institution.

Noting that the Anglican Communion was the first group to pay him a congratulatory visit, the Vice Chancellor reiterated his belief that positions and appointments were the prerogative of the Almighty God to bestow on whomever He wishes.

The Vice Chancellor, a Christian of the Anglican fold, said he was honoured to have the Bishop of Akoko Diocese leading the team, adding that it was noteworthy that the Anglican Communion thought it fit to congratulate and pray for him on the tasks ahead of him as the Universitys Chief Executive Officer.

He said, I want to say that I am the happiest man today, not because I am the Vice Chancellor but because the first official visit I will receive after my appointment is from the Church.

The implication is that God has ordained this assignment before me, my tenure has started with God and prayers and I believe it would end successfully.

Also speaking, the Bishop of the Diocese, Rt. Rev Jacob Olajide Bada, noted that the humble, humane and compassionate traits of the Vice Chancellor have endeared him to many in Akoko land and beyond.

He congratulated the new Vice Chancellor and assured him that the clergy of the Diocese would continually pray for him to have a successful and trouble-free tenure.

We have come to rejoice with you and the entire University Community. We appreciate Gods glory over you and we are happy that the Almighty God has accomplished what He said He would do. We will do everything possible, not only to support you throughout your stay in office, but also be with you in prayers at all times, he assured.

Principal and senior University officers, including the Registrar, Mr. Gbenga Arajulu; and Bursar, Mr. Tobi Orina, were also present at the event.