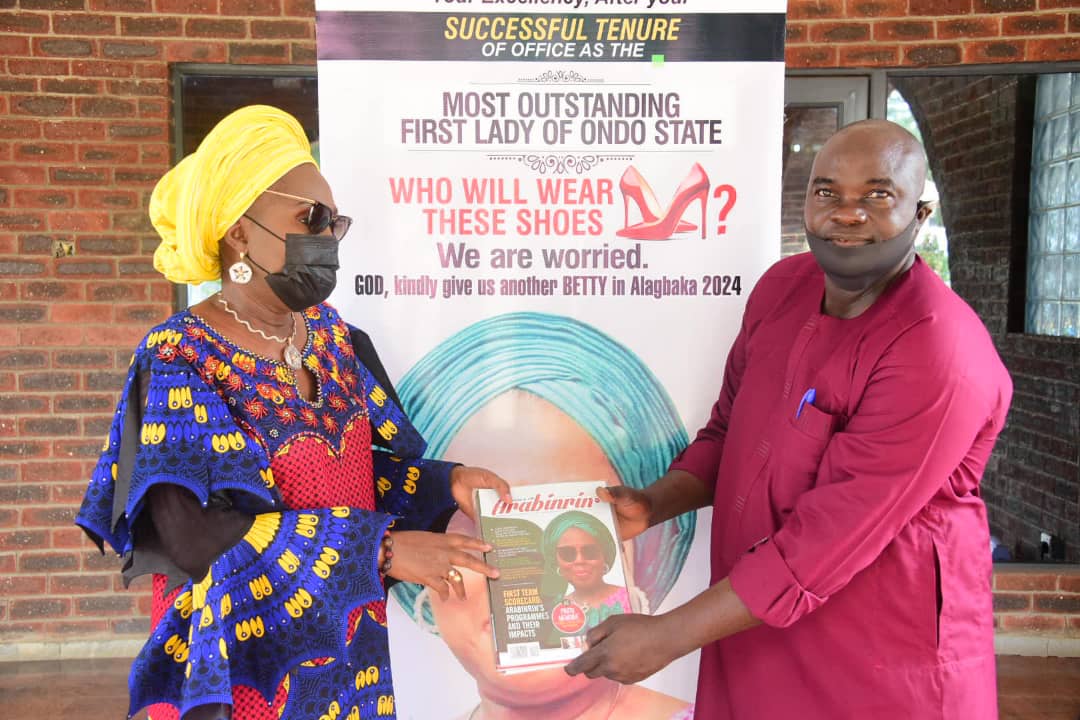 … Describes her as Pillar beside the Governor

The wife of Ondo State Governor, Betty Anyanwu-Akeredolu, has been honoured by the group Coalition of Non-Indigenes for Aketi -Season 2, a campaign group of Hausas, Igbos, Igalas, Tivs, Ebiras, and other tribes resident in the sunshine State.

The Coalition, led by its convener Mr Austine Alaba Medayeidu on a courtesy visit to the governor’s wife at Government House Alagbaka, Akure, described her as a pillar beside the governor who has changed the perception of office of the First Lady.

“ Arabinrin Akeredolu is an outstanding woman who has given a new face to the office of the wife of Governor of Ondo State. We are very proud to have her as our First Lady. All her initiatives are about the development of people such as BEMORE for the girl-child, BRECAN for our women’s health and Widows Care for the marginalised.

We have heard of some governor’s wives getting arrested in Dubai, others carrying state money to foreign countries to buy gold. Our First Lady is a farmer, a caring mother and grandmother, constantly filling the gap for the poor and needy.”

Mr Medaiyedu also extolled Governor Oluwarotimi Akeredolu, SAN, describing the various landmark achievements of his administration as positively impactful to all without any form of discrimination, noting he is the first Governor to promote unity amongst various tribal groups in a cosmopolitan state.

“ Our amiable Governor is not tribalistic; he is a man who encourages both indigenes and non to coexist together peacefully. He has created an enabling environment for us to go about legitimate businesses without any hitch. We have reciprocated his gesture by supporting him unflinchingly with our votes in the last election.”

An indigene of Kogi State, married to an Ondo woman from Ikare, Mr Austine Medayeidu, observed there has never been any record of ethnic clash under the leadership of Arakunrin Akeredolu as it is in other states.

Mrs Betty Anyanwu-Akeredolu expressed her gratitude at the unique and deep theme of the group’s presentation, saying she was highly honoured just as she further commended the Coalition and other similar groups for their unalloyed support during the election.

“ Your recognition indicates that people are watching and are aware that the lady beside Aketi is also contributing to the development of the State. I hope that I have set a pace for any future First Lady of Ondo State to emulate.”

The wife of the governor presented a magazine, “Keeping Up With Arabinrin”, a compendium of her activities published quarterly.

“ My quarterly publications are for legacy. When you go through it, you will know everything I do. Documentation is vital to me. As a daughter of a headmaster, my father passed on to me the importance of keeping record. Your kind gesture is noted and appreciated. I will convey all to Mr Governor.”