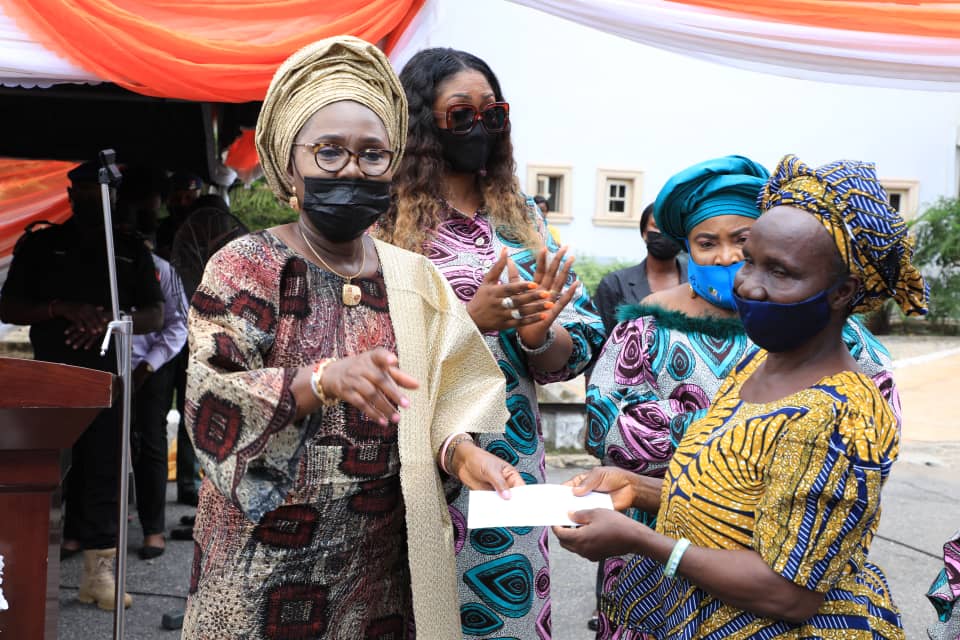 …reiterates commitment to reach every group

As part of activities to commemorate the 100 days in Office of Governor Oluwarotimi Odunayo Akeredolu, SAN, for the second term, presentation of cash gift for senior citizens was today flagged off across the 18 Local Government Areas of Ondo State.

At the ceremony held at the government house today, the Ondo First Lady, Arabinrin Betty-Anyanwu Akeredolu who presented the cash for the beneficiaries from the Central Senatorial district, noted that the initiative was a manifest expression of the love that herself and the Governor have for the aged, saying that their welfare was a top priority of the current administration in the state.

She said: ” You represent a sacred class that any responsible government should listen to and care for. Today’s event is essentially to tell you that you are very important, and your welfare is paramount to this present administration”.

The wife of the Governor who reiterated the commitment of Akeredolu-led administration towards reaching out to every group regardless of the dwindling economy, as witnessed in the widow’s palliatives programme which she initiated last year, averred that the senior citizens had used their active years to contribute to the development of the state and the nation as a whole and didn’t deserve to be neglected at old age.

She assured them that the gesture wouldn’t be a one-off thing and that Government would keep listening to their yearnings and aspirations so that they would live a better life at old age; while acknowledging that taking care of the elderly people needs special attention, using her late mother as an example.

“Be rest assured that the government has captured you in the scheme of things, as part of the most important segment of the state. Be confident that we are committed to your welfare, all our elders across the 18 Local Government of Ondo State will be reached in due time with this initiative”, she noted.

The Ondo First Lady, therefore, enjoined them to make use of the health talks given to them in order to enjoy their old age.

Earlier, the Chief Medical Director of the Mother and Child hospital, Akure, Dr. Mrs Banke Oluwafemi lectured the beneficiaries on how to live healthy at old age by eating appropriately.

She advised them to be engaged in minor exercises such as walking, taking of adequate diets that doesn’t cost much, and have grandchildren around.

A beneficiary, Mrs Felicia Fadahunsi who admitted publicly that she’s not a member of either the ruling or the opposition party, gave kudos to the Akeredolu-led administration for not discriminating in sharing benefits of good governance, noting that she has since been enjoying the dividends of democracy since the inception of this administration.

Also, Mr Ganiyu Odumesan appreciated the initiative, noting that it would take only a government that has the interest of the masses at heart to organize a welfare package for the vulnerable groups despite the economy situation of the nation.

The programme also featured medical check-up, and the medical team advised the elderly on the necessary steps to take about their health status.

In attendance were the wife of the Deputy Governor, Mrs Oluwaseun Ayeidatiwa, members of the Forum of the Wives of Ondo State Government Officials and Female Political Appointees, FOWOSO, and some top government officials.